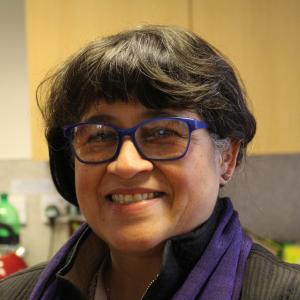 Mayra Ugalde is the General Secretary of the Bible Society Costa Rica.

Costa Rica is a country with a long history of peace, and a government that is very stable. Unlike other Latin American nations, this small country has suffered just one coup d'état in its entire history (if indeed we can call it by that name), and as a direct result of that the army was abolished.

However, countries, people and environments experience changes. Despite having a legal system based on Christian beliefs concerning social welfare, recent governments have forgotten the commitment to the people and sought only their own personal benefits. More than eighty laws that benefited the vast majority of Costa Ricans were overturned due to political issues, which affected many people.

In previous years and during other governments we had given politicians an audio Bible, a printed Bible or a USB device with the Bible on it. However, this didn’t guarantee that they read the Scriptures or that the message ever touched their hearts.

Despite having a legal system based on Christian beliefs concerning social welfare, recent governments have forgotten the commitment to the people and sought only their own personal benefits.

At the Bible Society of Costa Rica we are convinced that our mission is that "the message of the Bible reaches the people," so we prayerfully started to think about how we could make the legislators remember the rules they know and that changes that they implement, they do so for the benefit of the people.

We were reminded of the way Jesus reminded the Pharisees of the commandments to "Love the Lord your God with all your heart, with all your soul, and with all your mind" and "Love your neighbor as you love yourself" (Matthew 22.37,39). That had to be the way! As Jesus reminded the authorities of that time of those commandments, we should do the same with today's politicians. And our hope is that these truths remain in them so they stay in effect in the Asamblea Legislativa (National Congress) throughout the governments so that no one can remove them from there.

We invited a friend who is a journalist at the Asamblea to join us as part of this initiative and started working together. Because we were sharing the Word of God, we decided to get in touch with the best sculptor in Costa Rica, Mr Edgar Zúñiga, who at the time was the president of the Sculptors in Latin America. We knew that because of his fame each piece of art would be very expensive, but we decided that hiring him would be strategic.

We talked with Zúñiga, who told us about his unfamiliarity with the Scriptures. However, the project seemed an excellent idea to him.

When we later visited his workshop, he had read the Ten Commandments on the internet in at least three versions of the Bible (We also gave him the text printed in six other versions!). We began the work of translating the texts into the language of art. At the same time we consulted with different theologians because we didn’t want a biased interpretation of the text but one faithful to the original message that God wanted to give to his people. Being aware that the third part of our Asamblea Legislativa was formed by practicing Jews, they had to be taken into account because it was through them that we received the Scriptures. This led us to christen the sculptural installation project ’The ten words’, a sacred title that the Jews gave to the Ten Commandments.

As Jesus reminded the authorities of that time of those commandments, we should do the same with today's politicians.

At the same time we began the process in the Asamblea, there were more than 145 bills awaiting their approval! Our goal was to have the sculptures ready by September. We call September “a Bible month” because it is a period where we promote the relevance of the Bible in the media, secular universities, international bookfares and conferences. So we needed to secure the vote before this period. We were blessed to have a person, Mr Edgar Zúñiga, who has necessary skills and conviction to negotiate with the lawmakers.

Three months later we have approval for the project with just one negative vote (from a legislator that was member of a church!). The argument of this man was: "I do not want anything to mention God in this Assembly." We are grateful to God that his sentiment did not prevail.

Finally we delivered the sculptures on 17 September 2014. The General Secretary of the Asamblea said: "The history of this Asamblea has changed since these sculptures arrived; every week the Sculptures are visited by students, other legislators and constantly appear on television."