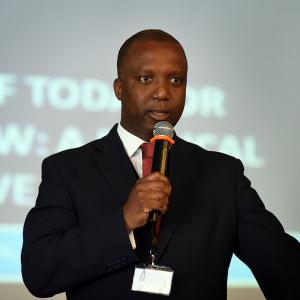 Justice Dr Chifundo Kachale is a Judge in High Court of Malawi.

The Bible is fundamental to the work of a judge. In the first place one must derive his identity and sense of value from a personal relationship with Jesus Christ. The security of that unique relationship provides a stable platform for effective service to society with the humility which the Master displayed, as discussed in Philippians 2. The significance of that understanding as a premise for professional engagement and interaction with court users and society at large cannot be overemphasized in the context of a very lucrative appointment such as a judge which brings with it many trappings of power and privilege; in a society marked by poverty and lack (where I work), it is so easy to forget the enormity of the responsibility that this appointment places upon one’s shoulders. A proper integration of faith and work can then inspire a balanced professional ethic. For example a humble judge cultivates a greater sensitivity towards the needs of all court users; thus making one a better servant of justice than otherwise might be the case.

In a society marked by poverty and lack (where I work), it is so easy to forget the enormity of the responsibility that this appointment places upon one’s shoulders.

Secondly, one’s faith should inform the understanding of their role within a civic governance structure. According to Romans 13 and 1 Peter 2, the judicial function is very much part and parcel of God's sovereign rule over the affairs of man. Therefore, in serving society in this high office one must be aware of the ultimate accountability one bears before the Divine Sovereign on whose behalf one discharges this 'secular' job. Within that context, therefore, one must be conscious of the world view that informs one's jurisprudence to ensure that it is aligned with the divine law of love and justice. In other words, the definition of just laws must as much as possible reflect the biblical standard of right and wrong. Above all else, this perspective should challenge one to perform the judicial function with a view to creating social order and stability for the benefit of all citizens.

In serving society in this high office one must be aware of the ultimate accountability one bears before the Divine Sovereign on whose behalf one discharges this 'secular' job.

At the same time the prophetic revelation of Daniel 2 suggests that in the final days of human history the form of governance that will dominate world politics shall predominantly be one premised upon Greco-Roman values (i.e. popular democracy with a strong humanistic influence). In light of such an understanding, someone engaged in the judicial office must anticipate a clash of values between biblical righteousness on the one hand and laws promulgated upon purely secular and very humanistic interests on the other. Inevitably, therefore, the core tenets of one’s Christian beliefs will, from time to time, be confronted by other ‘ungodly’ values which are being embraced by the society in which judges have been called to serve.

However, even within such a politically diverse context there is an abiding obligation to maintain fidelity to The Lord who continues to assert Himself as The Sovereign Ruler over all world affairs. It is only to the extent that one is able to preserve without compromise those defining values of one’s faith even in the face of very stiff and stringent opposition that one can truly become salt and light in this crooked and perverse generation. Otherwise, the pressure to conform and become politically correct is so immense that it may feel like standing up for what others consider to be ‘outdated’ values is a worthless battle. Yet the historical example of Daniel and his three Jewish friends confirms quite clearly that our personal witness in the midst of extreme hostility is still part of our duty towards our God. As a public servant operating within a government which did not even recognize his Jewish God, it would have been much easier and expedient for Daniel (as well as his three friends) to simply go along with what Babylon demanded of them; after all the reality was that Babylon had proven its superiority by capturing and destroying the other civilizations (including Judah and its entire system of worship). Yet Daniel recognized that the real power behind the throne of Nebuchadnezzar was still his Lord, the God of Judah! As such Daniel realized that obedience to God superseded any demands by the government of the day, no matter how powerful.

Obedience to God supersedes any demands by the government of the day, no matter how powerful.

Thus the story of Daniel offers a clear reminder to all of us who are living in this generation: In the face of strong global lobbies that represent very ungodly values, every judge who claims to be a Christian needs a clear biblical perspective. Such insight should seek to integrate faith with real life pursuits; if your faith does not affect your vocation, then you run the risk of losing your Christian witness and influence on society. It is imperative for every Christian professional to remember that we have been called to be both salt and light; that is a double-pronged approach to fulfilling our role as witnesses in society. In being light we explain and expose the truth of God’s word; in being salt we demonstrate by example what a life submitted to that word looks. Salt demonstrates and light proclaims; example and exposition are both vital to complete the task of teaching the world not only to hear but also to obey the doctrines of our faith. If indeed one accepts that the Lord is Sovereign, then one cannot countenance a legal system that overtly subscribes to values that offend the divine revelation of right and wrong as being sound and just. The wisdom to articulate these views using a narrative that need not always invoke the Scriptures but still preserves fidelity to such high and noble values is one of the greatest attainments of judicial craftsmanship.

There must be a truly biblical appreciation of the role of a judge as it relates to the prophetic fulfilment of God’s purposes in order for one to uphold the abiding values revealed in God’s word.

There must be a truly biblical appreciation of the role of a judge as it relates to the prophetic fulfilment of God’s purposes in order for one to uphold the abiding values revealed in God’s word; there is an equally corresponding obligation to remember that one shall be answerable before the judgement seat of Christ for all that they do in their professional capacity. Such knowledge breeds humility and responsibility in the performance of this truly noble task within the society.