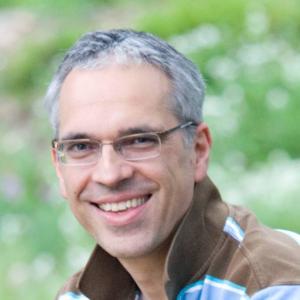 James Catford is Bible Society's Group Chief Executive. He has a background in commercial book publishing having been publishing director at both HodderHeadline and HarperCollins.

Set beside a beautiful lake in North Wales, some have called Mary Jones World 'the spiritual home of Bible Societies'. It tells the story of how, in the year 1800, a teenage girl walked a long day's journey, most likely barefoot, to buy a Bible in her own heart language of Welsh.

Inspired by her example, most of the Bibles in most of the world have been produced by Bible Societies that form the United Bible Societies. Little, however, is known about the passion behind the people who started this great movement and what their hope was for the future.

The young Mary Jones received her Bible from an independent church minister in the town of Bala. His name was Thomas Charles and he is celebrated today for his pioneering contribution to open-access education across Wales. It was Charles who with the backing of others, set up the original British and Foreign Bible Society in London in 1804.

Amongst the supporters of the new Bible movement was William Wilberforce. A Member of Parliament and practicing Anglican (Episcopalian), Wilberforce is most famous for the abolition of slavery in the British Empire. Other social activists such as the prison reformer Elizabeth Fry joined the visionary call to take the Bible to the world.

Such was their significance in our story that BFBS has meeting rooms named after both Charles and Wilberforce, along with Lord Shaftesbury, another radical social reformer of his day.

As the story of Bible Societies has been told down the years, two noticeable features stand out. One is that our founders came from a whole variety of Christian denominations and the other is that the object of BFBS was the "wider circulation or use of the Bible” and “without note or comment".

To keep out of church disputes and simply share the Bible 'without comment' was highly unusual for those times.

Today we talk about Bible Societies being 'interconfessional' and holding to a 'generous orthodoxy' in faith and conduct.

This is one of the reasons why the 'post-denominational' church in China is willing to work with us.

Interconfessional, generously orthodox and post-denominational - this is our pioneering story. But it is not the whole story and it doesn't do justice to the men and women who created our movement.

In the United Kingdom, the United States and elsewhere, our founders were committed to society every bit as much as they were to the Bible. Indeed, the best way to understand them is to see the Bible in one hand and social change in the other. What's more, the Bible actually inspired the reform of society that they were seeking.

Our founders were not isolationists who withdrew from the public square. Far from it. They were engaged in all kinds of activism from better working conditions to animal welfare. When BFBS appointed a worker for the British Houses of Parliament in 2004 we said that he was our second senior Parliamentary officer. The first, 200 years earlier, was William Wilberforce.

In taking the Bible into the world of media, arts, politics and education, we do so with a strong history behind us. We are translating the Bible into a particular cultural context. To be effective in our work, we have no choice.

So how can we engage the Bible in society without abandoning the governing principle of 'no note and comment'?

First of all, our founders were not suggesting that we cannot say anything about Scripture, only that we can't say anything that's sectarian about it. This means that we don't take a position on controversial issues that divide Christians. We have no mandate for doing so.

(Understood this way, simply publishing the Bible without comment was a statement about the Bible; that it is able to stand on its own two feet. No comment was actually a very profound comment on what the Bible is, and is not.)

However, we do speak in broad terms about issues where Christians are agreed. For example about building a harmonious society, or that 'the Bible is a unique source of essential knowledge about the most important things in life' as Dallas Willard put it.

Our experience is that it is possible to advocate for the Bible without breaching our original mandate.

In looking forward to the future we are eager to find new and innovative ways to do this. Not to speak for the Bible or on behalf of the church, but to engage people with the Bible and let it speak for itself.

We strive we do this with wisdom and grace. What will work in one context may not work in another. But when it comes to the big issues of our day, we want to join with others to demonstrate that the Bible is part of the answer, not part of the problem.

We want to demonstrate that the Bible has value culturally, socially and spiritually. In appropriate ways it deserves to sit on the top table of world affairs.

This is how we honour the genesis of our past while also looking to the future of our work and mission under God.