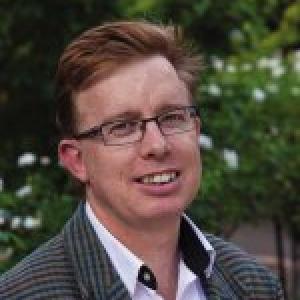 Dr Michael Bird is Lecturer in Theology at Ridley Melbourne and is a Fellow of the Centre for Public Christianity.

Late Sam de Brito of The Sydney Morning Herald was known for his Richard Dawkins impersonation with occasional tirade about religion and violence. An example is his piece, God is with us, unfortunately. De Brito gets good traction from the current bloodshed sweeping across Syria and Iraq, where religious sectarianism and Jihadist ideology are manifesting themselves in a cruelty and carnage that most of us can hardly fathom.

For the Jihadists, theirs is a God who not only wants to smite unbelievers, but delights in the gruesome violence of his followers who do it on his behalf. Given this God-inspired genocide, de Brito cannot comprehend why anyone would want to believe in any deity or put up the façade that one did. This, of course, leads de Brito to his main point, which is to propose that the hypothetical rejection of religion would lead to the end of the all tumults that the world is facing. He writes:

‘Remove questions of God from Israel and Gaza and you're left with two people who have more in common than they care to realise. Remove God from the rest of the Middle East, it wouldn't be devouring itself in a sectarian war over a 1,400-year-old disagreement.
‘Remove God from Australia and gays can marry, penalty rates disappear on Sunday and a seven-year-old won't be holding a severed head on the news.’

What I cannot understand is the naïve presumption that once we got rid of religion, the world would instantly be a better place – as if everyone would instantly put aside their differences, and discover themselves in a utopian community of common humanity.

If only it were that easy!

I can understand how the Iraqi and Syria crisis gives de Brito and others further grist for their mill that religion is the mother of all evils. It is clearly the case that religion, when understood in a certain way, can and does animate and legitimise the use of violence. I can understand why current events may lead some to turn away from the news feeds and to indulge the John Lennon line ‘imagine there's no religion’ so that they can conjure up a world without the Islamic State, Gaza, bigotry, or blood-soaked sands if only as a means of coping with distress. But what I cannot understand is the naïve presumption that once we got rid of religion, the world would instantly be a better place – as if everyone would instantly put aside their differences, and discover themselves in a utopian community of common humanity.

It is worth pointing out that atheist regimes of the 20th century killed more people than all the jihads and intifadas of the same century combined. Millions upon millions perished in Hitler's holocaust, Stalin's Russia, Ceausescu's Romania, Mao's China, Pol Pots' Cambodia, and the Kim family dynasty of North Korea that continues its irreligious-inspired brutality to this day.

These regimes frequently singled out and slaughtered religious communities, clergy and laity, of all ages. Churches, mosques and synagogues were all demolished by the order of those whose minds were supposedly untainted with the puerile superstition of religion and were self-proclaimed rationalists. Atheist revisionists like Richard Dawkins habitually overlook or ignore the violence perpetuated by atheist regimes against religious communities

Dawkins once claimed that no atheist would ever bulldoze a cathedral, to which Oxford mathematician John Lennox responded that he was right, the cathedrals were too big, the atheists used explosives! So I find it ironic that de Brito wants to 'judge an idea by the consequences to which it leads in action’. If so, atheism is no longer the ideological messiah that he thinks it is.

While religion can be a source of indescribable evil, it can also be a source of unexpected compassion too. Recently I heard news reports of Turkish Muslims providing shelter and care for Yezidi refugees fleeing northern Iraq. I know of several Christian aid groups not only in refugee camps in the region but even risking their own lives to go into Iraq to help rescue religious minorities fleeing the violence.

Atheists like de Brito are very good at cursing the darkness, but it's more often than not the religiously minded who are out there lighting a candle against it. I cannot speak for all religions, I belong to the Christian tradition, but one of the strengths of the Christian tradition is that we can take evil seriously. For Christians, evil is not simply a game with words, mythical language deployed to describe our own likes and dislikes, relative rather than real.

Instead, the Christian believes that evil is an intrusive force in this world, not how it was supposed to be, and not how it will be. According to Christianity, God's plan is to expunge evil, not with holy violence or crusader carnage, but, mysteriously, to draw it all into himself, into his son's own crucifixion, so that its power will, ultimately, be defeated.Accordingly, God sends out his people to follow Jesus' example as peacemakers and ambassadors of reconciliation, pursuing peace with God and peace with fellow human beings. Many of us haven't been very good at this, but there are enough who are to make the world a much better place than it would be without this story. You don't have to be religious to appreciate the sentiment, but experience tells me that it certainly helps.

According to Christianity, God's plan is to expunge evil, not with holy violence or crusader carnage, but, mysteriously, to draw it all into himself, into his son's own crucifixion, so that its power will, ultimately, be defeated.

I admit that the heinous evil engulfing the Middle East is not exactly the best advert for religion. But de Brito is kidding us all if he thinks this defines all religion or that the irreligious are somehow immune from it. The greatest violence in history has not been performed only by religious people. The most inhumane and horrific forms of violence are perpetuated by people, of all faiths and none, who believe that their cause is so righteous that it justifies the most unjustifiable acts of evil.

The problem of evil is not simply a religious problem; it's a human one. And if the common denominator is humans themselves, then you can hardly chastise those of us who look to God for inspiration, courage, compassion, and strength to resist evil and even to rescue those imprisoned by it.
That's the sum of true religion.

This article has previously appeared on Public Christianity.