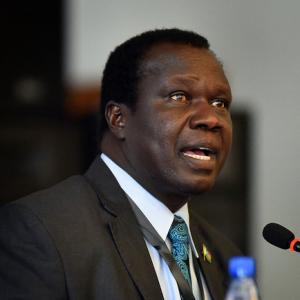 Hon. Paul Yoane Bonju is a Member of the South Sudanese National Legislative Assembly. He previously served as the host of Christian radio owned by the South Sudanese Council of Churches. He is one of the few South Sudanese MPs who attended the last two consecutive African Biblical Leadership Initiative (ABLI) Forums. He has a passion for the place of the Bible in public life and the role of the Church in bringing peace and reconciliation.  We asked him to reflect on the Bible, public life and political climate in South Sudan. We presented the first part of our conversation last week, and here is the last part.

What role does the Bible in particular and Christian faith in general play in the reconciliation process in South Sudan?

Paul’s letter to Ephesians 4.30 says ‘And do not make God’s Holy Spirit sad; for the Spirit is guarantee that the Day will come when God will set you free.’ Both the Christian faith and the Holy Bible play a pivotal role in bringing about reconciliation in the tribal, divided society in South Sudan. However, this depends on the personalities who are tasked with this work of reconciliation and people who are behind this reconciliation process matters much. In South Sudan, influential individuals matter greatly.

Both the Christian faith and the Holy Bible play a pivotal role in bringing about reconciliation in the tribal, divided society in South Sudan.

For example, Murle tribe rebelled against the government in Juba. The Murle are a small South Sudanese tribe found in Boma County, Jongule state. During the peace negotiations with the government, their first demand was to not have a Dinka chief mediator. The Dinka tribe is the largest ethnic group in South Sudan. This group rejected an Archbishop who is Dinka tasked by the Presidency to chair the National Reconciliation and Healing Commission. The group instead went and proposed a retired Catholic Bishop Paride Taban to head the government’s negotiating team. Indeed, a peace deal was signed between this cobra rebel group (Murle) under General David Yawyaw and the government of the Republic of South Sudan in Addis Ababa.

This is one example among many, which illustrates that reconciliation is not an easy process. It requires people whole lead by example in both words and deeds. The past five decades of conflict in South Sudan have rendered the South Sudanese community as divided, particularly, among the cattle keeping tribes. As of now, revenge and counter revenge killings are the order of the day in some parts of South Sudan. Because of tribal impunity, the newest nation in the world is losing some of its potential and productive sons and daughters.  The message of the Bible is for us to be the light for the whole world. Like a city built on a hill that cannot be hidden. (Matthew 5.14).

You have followed two consecutive African Biblical Leadership Initiative (ABLI) forums in Ghana 2014 and in Malawi 2015. How do you assess the relevance of such an initiative to the domain of governance?

Both the ABLI forums (Ghana in 2014 and Malawi in 2015) have been significant. The two ABLI forums were well organized with relevant selected themes. In the Ghana 2014 forum, I learnt regarding lot from theme The Missing Factors in Leadership in 2014 in Ghana. In ABLI 2015, in Malawi, the forum tackled the issue of corruption and how the church can play a role in combating it. The keynote address by Dr Patrick Lumumba, a former director of Anti-Corruption Commission in Kenya, was especially challenging for us the leaders in Africa.

Today, political developments in Africa clearly indicate that God-fearing leaders are yet to be equipped to govern the continent. See the events in the Democratic Republic of Congo, Burundi, Central African Republic, not excluding my own Country the Republic of South Sudan. Yes, some African leaders might appear to have given a blind eye to the suffering of their people who are dying day and night from preventable causes. The missionaries or the fathers who brought the faith are to be hailed. One area they failed is to inculcate in the minds of the African leadership is to be mindful of people’s sufferings.

Though the future appears bleak, I believe that, thanks to platforms like the ABLI forum, things will gradually change for the better. We hope that the continuing constitutional amendments to keep African leaders illegally in power will soon be something of the past. Tanzania, Ghana, South Africa, and Nigeria are positive examples where leaders respect their constitutional period are self-explanatory.

The ABLI forums are platforms for change in attitude and behaviors of us, the African leaders both in the executive or the legislative arm of the government.

In Ghana 2014, the participation of key government officials in the forums, particularly from the Judiciary arm of the government, indicate that governance in Africa is changing faster. The ABLI forums echo strongly the words of prophet Isaiah, where he says ‘Your leaders are rebels and friends of thieves; they are always accepting gifts and bribes. They never defend orphans in court or listen when widows present their case.’ (Isaiah 1.23) The ABLI forums are platforms for change in attitude and behaviors of us, the African leaders both in the executive or the legislative arm of the government. I am of the strong opinion that the message in ABLI forums should be widely accessible. With its relevant theme and amicable discussion others who do not have an opportunity to attend the forum would be greatly benefited from the ABLI material

Finally, what is your wish (as a Christian and politician) for South Sudan?

My fervent wish as a Christian and Politician for South Sudan is for us as individuals and a country to seriously cling to the great commission (Matthew 28.19). It reads ‘Go, then, to all peoples everywhere and make them my disciples; baptize them in the name of the father, the son and the Holy Spirit, and teach them to obey everything I have commanded you. And I will be with you always, to the end of the age.’

This is my wish for my country devastated by war. Taking this great commission will relieve my suffering people, the majority of whom could not afford to put a meal on the table. We – the South Sudanese leaders – should publically apologize for the mistakes created due to poor governance. The apology should be made when justice has played its part.

We should too apologize to our allies worldwide particularly the Troika Countries (The United States of America, the United Kingdom, and Norway). Without their tacit support there would be no Republic of South Sudan today. Apology without the perpetuators being brought to face the force of the law is meaningless.

We – the South Sudanese leaders – should publicly apologise for the mistakes created due to poor governance. The apology should be made when justice has played its part.

Finally, I would have committed a grave mistake without saluting some of our eminent clerics, especially Lord George Carey, who paid a historic visit to Juba in the midst of the conflict 1995. In his public key address at All Saints’ Cathedral; he said “I urge the Sudanese leaders to seek peace; I urge the SPLM/SPLA leaders to seek peace”. He concluded his thrilling sermon by saying “I admire your singing because in joy you sing and in sorrow you also sing.”

As I interpreted for him in that huge open air service in Juba attended by thousands of Christians from different denominations, that moving sermon delivered by the then Archbishop George Carey, now Lord Carey, still speaks afresh to us South Sudanese people and communities. As part of the government in Juba, I appeal to the British and Foreign Bible Society to add its weight for full implementation of the recent Agreement for the Resolution of the Conflict in South Sudan. The Agreement is full of reform elements for the different institutions of our government.