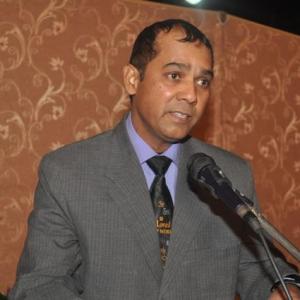 Irfan Francis is Sports Coordinator at the Bible Society of Pakistan

The Pakistan Bible Society was established in 1863. 2013 marked the 150th anniversary of the Pakistan Bible Society. We celebrated the anniversary in a befitting manner. In this year along with other programs we also inaugurated and dedicated the Bible Museum for Christians and non-Christians in Pakistan. This Bible Museum is unique in Pakistan. We have 33 manuscripts and parchments which make it informative and quite a good number of items of biblical archaeological significance. The scale models of the Holy Land, Jerusalem and the Second Temple provide visitors with a very good idea of the topography and what the Second Temple looked like. There are old Bibles and one King James Version we have is around 400 years old. Most of the Bibles are between 100-250 years old, and they generate a lot of interest.

We have 33 manuscripts and parchments which make it informative and quite a good number of items of biblical archaeological significance.

At the time of inauguration the guest speaker said ‘This Bible Museum is a symbol of Christian recognition in a Muslim country’ and one leading Pastor said that “Although the Pakistan Bible Society has built it, it is an asset of the whole Church in Pakistan”. The Bible Museum is very popular with Christians and non-Christians. We regularly have visits from Christian Schools, Sunday Schools, seminary students, pastors, Christian scholars and lay people. We record visitor numbers and where they come from and from our register we can say that, on average, 25 people visit it daily. Non-Christians also visit and sometimes they will call and come. Many Muslim scholars also visit our museum. One of the Muslim scholars said ‘The artefacts displayed in this museum provide important information. Through these displays a person can learn about Bible. I would not hesitate to say that this place is unique for Christian communities in Pakistan. There is also much to learn about Christianity through this museum. I am thankful for the provision of such a facility in Pakistan.’

The idea of setting the museum up was to educate our community about the Bible text, and the idea that it has not been changed. We started a series of seminars more than ten years ago in which we taught about Bible text transmission. Muslim scholars and other visitors are amazed when they see the Dead Sea scroll copy of Isaiah as it is from 200–235 years before Christ. The copy of the Codex Sinaiticus is of great interest also.

One of the Muslim scholars said ‘The artefacts displayed in this museum provide important information.  There is also much to learn about Christianity through this museum. I am thankful for the provision of such a facility in Pakistan.’

The current Bible Museum is 24 feet square, which is not enough for more displays. We are thankful for the provision of space from our neighbour which is also a Christian organization. The additional space is 24 by 34 feet and another room 13 feet by 11 feet. This will increase our space one and a half times. We need your prayers for funds and set up of displays. In the new space we will add a model of the ‘Qumran Valley’ in which we will place scale-size models of the jars which contained the scrolls. We will also add actual size models of the jars. We are also planning to create an area for children which will be interactive. We plan to add another floor in, as the ceiling is 24 feet high. This floor will be used for lectures on Bible archaeology and important manuscripts and artefacts. We plan to hold 4–6 lectures per annum. We will also create a backdrop depicting the Mary Jones walk in Wales with a dressing-up box so girls can get their photos taken. We plan to set up the scaled model of Jerusalem with houses etc., in an area 13 by 11 feet. We hope that this new area will provide better experience to the visitors.

We will also create a backdrop depicting the Mary Jones walk in Wales with a dressing-up box so girls can get their photos taken.

We thank God that the Bible Museum of the Pakistan Bible Society is a great tool for developing harmony and relationships with the government and non-Christians. This Bible Museum is also a great witness of the authenticity of the Bible text and has been instrumental in promoting the integrity and image of the Pakistan Bible Society among the Church in Pakistan. We are proud to have such a museum in Pakistan for the Christian community.